Set in a post-apocalyptic future where radiation has sterilised most of the human race and also created a race of mutant frog people, Roddy “Rowdy” Piper plays ‘Hell’- a surviving drifter who is one of the rare fertile men left on the planet.

Hell is fitted with an electronic chastity belt-type device marked “Property of Provisional Government” that’s rigged to explode if he strays too far from his sexy female guard Spangle. Spangle is trained in the art of seduction, and charged with making sure he fulfils his contract (Played by Sandahl Bergman whom you may recognise from Conan the Barbarian and Red Sonja).

Hell and Spangle infiltrate Toty’s palace by dressing Spangle in bondage gear and pretending that she’s Hell’s prisoner. They head to the bar with plans to do a fake trade so they can sneak into the harem, but their plans go awry when Bull, a particularly nasty frog with an eyepatch (because he’s evil) steals Spangle away, leaving Hell to attempt a daring rescue while also staying in range of her transponder so his balls don’t explode.

In true kick-ass Rowdy Roddy style he shows up right in the nick of time with a big gun, to rescue Spangle and his future baby mammas from Toty’s palace.

They flee into the desert toward the border with their bad-ass getaway driver and fellow guard Centinella (Cec Verrell) while Commander Toty pursues them in his Mad Max- style tank. Little does Hell know that an enemy from his past is also about to cross their paths. Will he ever get to complete his contract to impregnate the women, and canoodle with Spangle, or is the continuation of the human race (and his love life) doomed? 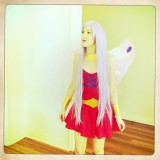